State utility Zesco’s debts have reached $3.5bn – $1bn more than previously thought – (446/16) due to a combination of rising liabilities to independent power producers (IPPs), long-running disputes with mining firms and the depreciation of the local currency, according to energy minister Peter Kapala.

In a report to parliament on 15 October, Kapala said Zesco’s debt to IPPs stood at $1.1bn at end-September. Zambia’s biggest IPP, Maamba Collieries, which runs a 300MW coal-fired power plant, is owed the most at $463m. Kapala said Zesco’s debt was largely due to importing emergency power at triple the price of the average selling price (AE 447/21). “Despite generating only 20% of the power sent out to Zesco, IPPs consume 47% of the Zesco entire revenue. The mismatch in pricing is a major cause of the financial distress that Zesco is currently experiencing,” he said.

The government wants to turn around Zesco’s financial position by 2025 and hopes to restructure Zesco’s IPP debt by spreading repayments and reducing the purchase price for electricity. However, industry sources doubt it will be able to substantially lower the price it pays for electricity as it would undermine the financing models of the IPP plants. “We are renegotiating IPPs’ tariffs to a level that allow settlements of monthly invoices and when they fall due, to stop the accrual of arrears,” said Kapala. “Zesco needs to rebase its relationship with IPPs and agree on long-term sustainable off-take tariffs.”

The government said Zesco is also owed $886m by mining companies, such as First Quantum Minerals, government-controlled Konkola Copper Mines (KCM) and Copperbelt Energy Corporation (CEC). There have been disputes about the tariffs paid by mining companies since 2014 when the Energy Regulation Board directed Zesco to increase tariffs without consultation or negotiation. Cases have been working their way through the courts ever since (AE 281/11).

However, the government has taken steps to improve relations with the mining sector in another area. Earlier in October, Zesco withdrew from a case at the High Court, which centred on the government’s efforts to gain control of CEC’s infrastructure to allow Zesco to sell power to KCM (AE 441/11). This marks a shift by the new government to a more pro-business stance. “As part of the turnaround strategy, we want to reset Zesco’s relationship with mining companies and CEC, which account for 60% of the generation, such that Zesco is able to charge cost-reflective tariffs,” said Kapala.

However, the ability to migrate to cost-reflective tariffs cannot start until an electricity cost of service study is completed in November.

The kwacha’s depreciation has worsened Zesco’s debt position. About 95% of the utility’s borrowings are pegged to the dollar and 70% of its operating costs, which include servicing the power purchase agreements with IPPs, are dollar-denominated. “When the kwacha depreciates against the dollar, the company makes losses,” said Kapala

The new government’s efforts to help Zesco out of its financial doldrums come alongside attempts to restructure sovereign debt, estimated at $14.5bn (AE 445/7). In early September, President Hichilema’s administration signed an extension of a debt service suspension initiative with members of the Paris Club of 22 mostly high-income official creditors. The government plans to use the extra fiscal space created from debt restructuring to improve social sectors such as health and education. Currently, up to 96% of government revenues are spent on debt servicing or funding the civil service. 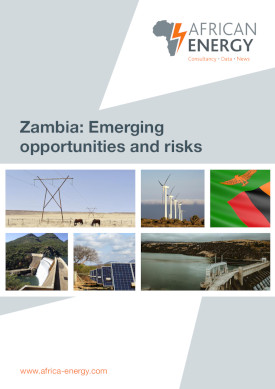 With developers and investors reassessing their options in Zambia following Hakainde Hichilema's 12 August presidential election win, African Energy has produced a special report covering the unfolding of this complex story, the latest on developments in the power sector, and key power data.

First held at RSA House in 2014, AIX: Power & Renewables has become one of the meeting places of choice for Africa’s power sector stakeholders, including leading private and public sector investors, African officials and project developers.

Produced by African Energy, the meeting is held under the Chatham House Rule and structured around interactive panel-led sessions to encourage an open debate.

More than 45 panellists have so far confirmed

There is a 10% discount on tickets that ends on 28 October.