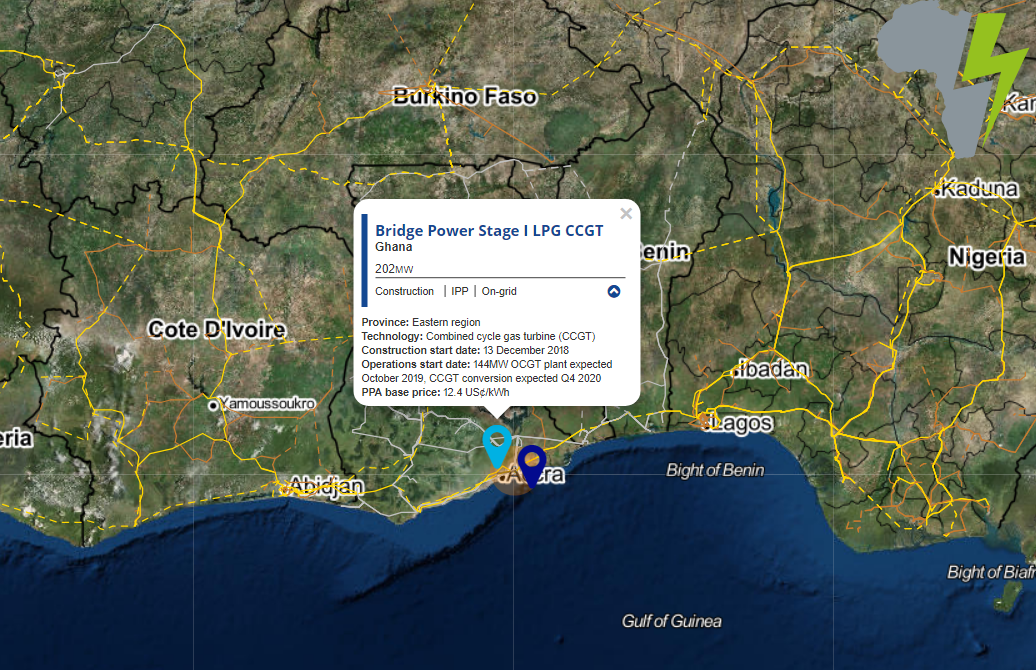 The plant is being built by engineering, procurement and construction contractor Metka, which was awarded the contract in June 2017 following the signing of a power purchase agreement (PPA) in October 2016. WSP and Aurecon South Africa are owners’ engineers.

Bridge Power was intended as a fast solution to power shortages afflicting the country in 2016, adopting a phased approach that would quickly bring online open cycle gas turbines to alleviate the crisis and later convert the turbines to combined cycle. Initial plans intended to bring 144MW online within six months and eventually increase capacity to 400MW.

However, the project has experienced significant delays, with the then government of John Mahama approving instead much criticised deals with Karpower and Africa Middle East Resources Investment Group (Ameri).

Short timelines in the PPA mean that Early Power is still finalising long-term financing, which is expected to be completed in Q1 2019 with Standard Chartered Bank as mandated lead arranger. However, GuarantCo entered the project to provide a payment guarantee for Metka. Metka general manager Panagiotis Gardelinos said that “we are delighted to have worked with Endeavor to realise the first stage of [Bridge Power] and implement an innovative structure of supplier credits to enable full construction of the project while the sponsors finalise arrangements for permanent financing”.

Bridge Power, which will use liquefied petroleum gas (LPG) until natural gas becomes available, will now bring its four GE TM2500 open cycle gas turbines online in around ten months, with a GE steam turbine converting the plant to combined cycle in Q4 2020. This will be the first time that GE TM2500 turbines have been operated in combined cycle configuration globally.

The LPG infrastructure developed for the project will be owned and operated by Sage and is intended to be used to supply LPG for domestic use once the plant has converted to natural gas. Sage will also be the fuel supplier.

“This project, which includes the construction of LPG import and storage infrastructure, will expand Ghana’s existing LPG capabilities, enabling the country to import three times more LPG each year”, Sage chief executive Emmanuel Egyei-Mensah said. “This will lead to significant improvements in domestic LPG supply availability and market penetration, which will, in turn, bolster the drive to make Ghana’s energy sources more diversified and secure”.

Endeavor will lead operations and maintenance at the plant as well as providing construction and commercial management. Early Power’s international legal advisor was Clifford Chance and Senet Corporate Solicitors was the local advisor. Norton Rose Fulbright and DLA Piper were legal advisors to GuaranteCo and Metka respectively and ENSafrica was their local advisor. Lima Partners was the project’s Ghanaian tax advisor. Trinity LLP was counsel for Endeavor. Jacobs Consultancy Ltd was owners’ environmental and social consultant and Marsh was the insurance broker.

Find a power plant on our database and don't miss our 15% Christmas discount on subscriptions to our fortnightly publication African Energy.