The coronavirus pandemic – and the global response to it – has already damaged the Egyptian economy. The speedy disbursement of $2.77bn to Egypt by the IMF on 11 May was a necessary response to the intense stresses the country is now suffering.

However, to understand the likely long-term impact, investors and lenders – including those in the electric power sector – need to ask whether the aftermath will include structural changes to key markets, for instance a permanent reduction in global oil and gas consumption, or in the number of people taking overseas holidays. While it is not yet possible to provide definitive answers, it is clear that important shifts have occurred in both these areas revealing a range of risks to both operating and planned IPPs.

African Energy’s detailed research and analysis – laid out in our Egypt Power Report 2020, published in February – shows the country already enjoys an extraordinarily large power generation reserve margin. A short-term reduction in GDP growth or even a period of recession followed by a vigorous recovery is likely to delay the need to build new capacity. However, this scenario may only have a marginal impact on long term demand growth. By contrast, if the present crisis results in structural changes, a more drastic response, including the re-writing of the government’s power sector masterplan, may be called for.

"The reduction in economic activity in 2020 will act as a drag on electric power demand. As installed capacity is already close to double peak demand, the addition of new low-cost renewable generation capacity may simply not be necessary."

President Abdel Fattah el-Sisi’s politico-economic vision is a controversial one in that it combines elements of economic liberalism typified by the independent central bank, floating exchange rate, bold subsidy reform, and openness to foreign investment with an aggressive extension of military control into all areas of the economy and society.  Whatever doubts may have already existed about the long-term sustainability of this approach, there were two highly bankable probabilities for anyone doing business in the most populous Arab state. The first was that the country was rejoining the ranks of global gas exporters – and with luck and momentum (and aided by the lack of better alternatives) – might even establish itself as a regional energy hub. The second was that Sisi’s iron rule would create the security necessary for a thriving international tourism industry. Both prospects have been undermined.

As recently as February this year, the 4.5m t/yr Segas LNG plant was on track to restart exports in June. Shell’s Idku plant had ramped up exports to just under half its 7.2 m t/yr nameplate capacity during 2019. The collapse of a deal between Segas shareholders Naturgy, Eni and the state-owned EGPC and Egas has left the government without a commercially viable gas export strategy and still owing $2bn in compensation to Naturgy for its refusal to supply gas to the plant in 2012. The Idku plant has also cancelled planned LNG shipments due to the collapse in global gas demand.

Stripping aside the complexities of the proposed arrangement under which the Segas plant would have restarted operations (it appears that Eni were expected to buy out Naturgy and would have been compensated by the Egyptian authorities with cheap gas feedstock), the brutal reality that for now there is no money in Egyptian gas exports.

It is also hard to estimate when the Egyptian tourism industry will revive. The government has postponed the planned opening of the new Grand Egyptian Museum adjacent to the pyramids from this year to 2021 in recognition of the global lockdown.

As acknowledged by the emergency IMF loan, these developments are having an immediate negative impact on the balance of payments. Combined with necessary extra expenditure on health and social protection the state budget is also under extreme stress. 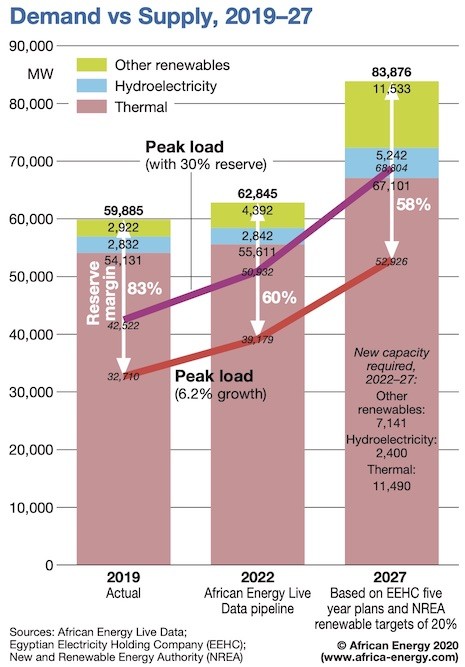 One likely outcome from this is that the reduction in economic activity in 2020 will act as a drag on electric power demand. As installed capacity is already close to double peak demand, the expected addition of new low-cost renewable generation capacity in the next few years may simply not be necessary. The likelihood of greater quantities of gas becoming available on the domestic market with no viable export route as ongoing upstream developments reach fruition could encourage continued dependence on already operating thermal plants.

Whether this amounts to more than a short-term stress requiring some projects to be postponed for a year or two depends on longer term factors. African Energy’s Egypt Power Report 2020 recorded that the regulator EgyptERA expected electricity demand to grow at 6.2% per year until 2035 leading to a 280% increase in peak load from 30,800MW in 2018 to 85,638MW in 2035. If demand grows by an average of 5% over this period peak load will increase by just 130% reaching 70,594MW.

The long-term impact of the coronavirus on Egypt’s economy therefore has the potential to weaken the feasibility of power generation procurement programmes in the government’s current and subsequent five-year development plans.

The impact of the crisis on the state budget may also have a decisive impact on decision-making around the proposed privatisation of the three 4.48GW gas-fired power plants built by Siemens in 2015-2018. The government has long planned to sell at least two of the plants (Beni Suef and then Burullus), but finding finance to replace the extremely competitive export credits which guaranteed their construction is proving a challenge. Additionally, no decision has yet been made about whether the government will favour a bidder offering to pay the highest price for the assets, or one offering the lowest offtake price to Egyptian Electricity Transmission Company. The state of the budget deficit may be decisive. The result will have repercussions throughout the sector for years to come, potentially influencing the level at which all future PPAs can be agreed.

For more insight and analysis, see our Egypt Power Report 2020 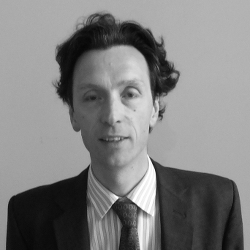