President Azali Assoumani has secured a second term in office after winning over 60% of the vote in elections marred by allegations of violence and a crackdown on opposition parties and supporters. Azali’s victory comes less than a year after a disputed referendum approved constitutional changes which critics fear could destabilise the delicate peace between the archipelago’s three islands: Grande Comore (Ngazidja), Anjouan (Ndzwani) and Mohéli.

Gone was the policy of a rotating presidency and the three vice presidential positions, through which the islands were equally represented; the political independence of the constitutional court has been compromised. Despite the opposition’s rejection of the election results, Azali’s consolidation of power is likely to see the Grande Comore native and leader of the 1999 military coup remain in office for at least the next decade. 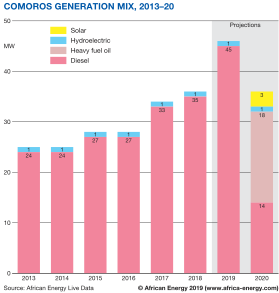 While Comoros seemingly drifts towards more centralised power, authoritarian behaviour and heightened levels of political discontent, Azali is desperate to be seen as making good on his 2016 election pledge to revive the country’s dilapidated and bankrupt electricity sector.

With support from countries including China and Abu Dhabi, new generation capacity is arriving in Moroni. In early 2019, seven units totalling 9.7MW were delivered to replace existing plants plagued by poor levels of maintenance.

The Indian-funded 18MW heavy fuel oil-fired plant at Moroni, initially due online in 2020, was to result diesel plants in Grande Comore being retired. But this project has run into the ground.

However, the archipelago’s dependence on thermal generation supplied with costly imported diesel has resulted in the sector being placed under huge financial strain, while the state’s pockets are barely deep enough to subsidise the shortfalls. Sector recovery programmes supported by the World Bank Group and African Development Bank have led to some operational improvements. In December 2018, state utility MA-MWE was reformed as Société Nationale de l’Electricité, while in May tenders were issued for the rehabilitation of hydroelectric power plants that had fallen into disrepair.

A focus on renewables

Moroni’s attitude towards electricity policy has also shifted. The authorities say that decades of reactionary decision-making is being replaced with a proactive approach. Comoros is looking very closely at renewable energy, particularly solar PV with battery storage. A number of private sector-led projects have cropped up – including Green Energy’s 5MW Lingoni mini-grid project and Innovent’s 3MW plant at Dahu– while the European Union is funding a 300kW pilot scheme in Mohéli.

Such projects, alongside plans for a 10MW geothermal plant at Karthala, could transform a Comoros energy sector which is currently reliant on 35.6MW of partially-operational diesel plants. However, both private sector interest and international donor support could dry up should the political situation deteriorate and a major crisis erupt. 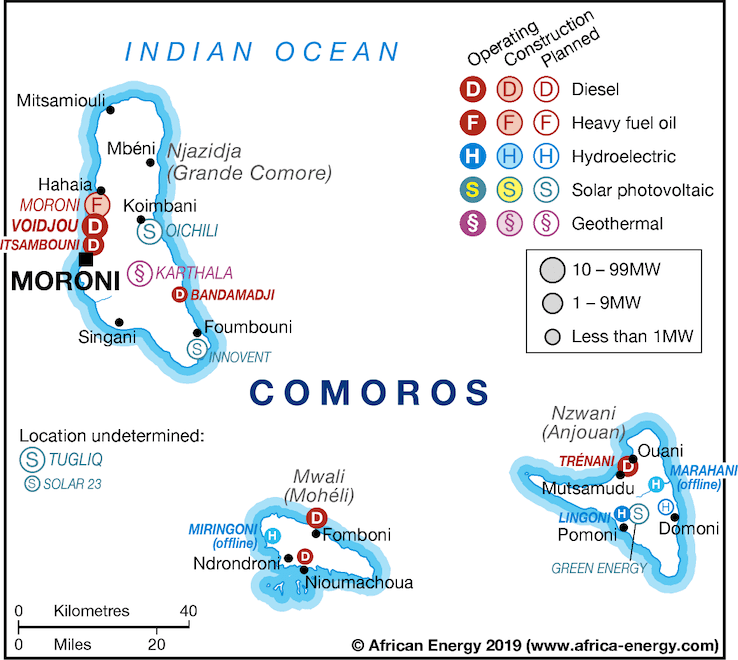 This case study is based on research work carried out by African Energy in March 2019.